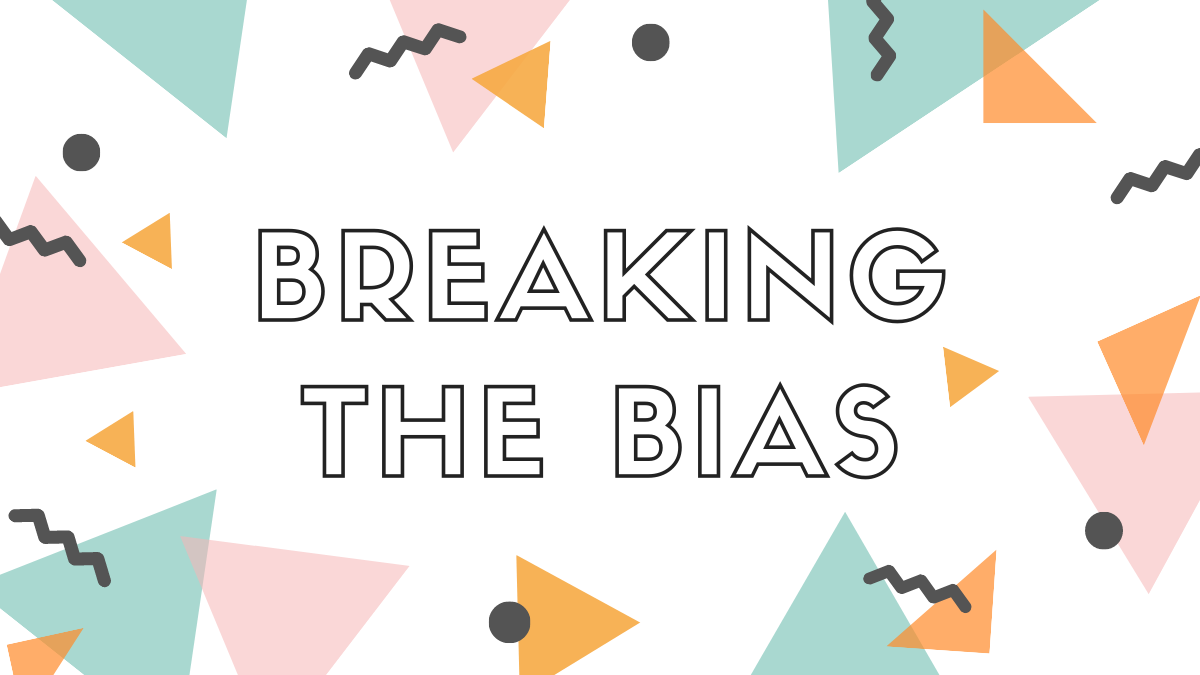 Today is International Women’s Day, and this year’s campaign theme is focusing on breaking the bias.

“Imagine a gender equal world. A world free of bias, stereotypes and discrimination. A world that’s diverse, equitable, and inclusive. A world where difference is valued and celebrated. Together we can forge women’s equality. Collectively we can all #BreakTheBias.”

Bias starts from a young age. As soon as a child is born – and sometimes even before – the gender stereotypes start, with the colours of clothes or types of toys that are chosen for the baby either by the parents, or gifts from friends and family. We didn’t find out either time what we were having, and it put some people in quite a tizzy as they didn’t know what to get us, until we’d gently point out that there were more than two colours in the world and besides, all colours were for everyone. But then, as soon as the boys were born, the blue gifts started coming. I remember in particular one set of blue baby grows with tool motifs on them – hammers, wrenches, screwdrivers (ironically, that’s the boy who has grown up to love anything pink and unicorn themed).

But there’s a lot we can do to break the bias in early years, so that our children can grow up in a world that’s one step closer to being free of stereotypes and discrimination.

We are our children’s first role models, and actions speak louder than words. In households with more than one parent, especially in different gender-couples, think about what the division of household chores signals to your children. Do they always just see mummy doing the cooking and cleaning, is daddy the one always responsible for fixing things or taking out the rubbish? Show your children that these things are not gender specific, including the chores they themselves have to help with. Children are more likely to reject the idea of a gender bias in the household, when their parents share domestic chores evenly.

Be Conscious About Our Language

Language is full of gender bias. From common phrases like “big boys don’t cry” and “boys will be boys”, to telling a child they run or throw “like a girl” or describing something as very “girly”. But even simple things like addressing a group of children as “boys and girls”, talking about being a fireman or policeman when they grow up, or describing someone as motherly, all drive home a gender bias. Being aware of our words and their impact, is a first step towards breaking that bias. Instead of fireman and policemen, say fire fighter and police officer. Instead of “hello boys and girls” greet them with “hello children”. Instead of describing someone as motherly, used “loving” or “nurturing” – characteristics that can apply to fathers too. We won’t always get our choice of words right, but we can try our best.

Whether at school, in sports, or even at birthday parties, segregating children by gender is still deeply ingrained in many social structures. Sometimes it’s casual, such as splitting up “boys versus girls” in P.E. lessons, sometimes explicit, such as only inviting all the boys or all the girls in a class to a party. These actions can have a negative impact, teaching a bias towards children of a different gender. But children who form close mixed friendships, tend to have a more positive attitude towards children of other genders. By encouraging mixed-gender play, we can help children recognise their similarities and celebrate their differences. And it’s also more inclusive of children who identify as non-binary.

High-street shops are often a sea of pink and blue. Or for boys from a certain age, colour seems to disappear altogether and you’re left with black and grey. That’s why I founded Awsm Street, to give all children the choice to wear all colours. But it’s not just the lack of choice in colours that can be damaging – it’s the motifs and messages too. Cute puppies and kittens for girls, fierce sharks and dinosaurs for boys. ‘Be nice’ messages for girls, ‘Be adventurous’ messages for boys. All of these feed in to the perceptions children have of themselves and others, and will affect their choices and decisions later in life. Be conscious of these biasses when shopping for children’s clothes, and be mindful of the messages and motifs on the clothes you choose to buy.

Be Aware of Gendered Marketing in Toys

Similarly, children’s toys are also often divided by gender – for example, construction sets, science kits or vehicles marketed at boys, and dolls, craft kits or play kitchens marketed at girls (though thankfully things are changing). Children learn important physical, emotional and social life skills through play, and gendered marketing can limit the toys children are exposed to. Let them explore all options available, regardless of how shops may have divided them up. Very young children won’t care what the labels on the aisle say. And if they’re old enough to understand, then explain to them that marketing boundaries are arbitrary and can be crossed.

Representation matters. If a child never sees a male teacher or nurse, or a female scientist or fire fighter, they will never consider that these careers are an option for them. Help to diversity your children’s role models by seeking out books, TV shows or movies which include representations of characters and behaviours that go against traditional gender norms – such as a female engineer or police office, or a stay-at-home dad. And in other instances, do call out stereotypes when they come up in stories – or in real life!

Tip: Check out our recent posts on 15 books with feisty, fierce & formidable females, and 21 gender stereotype busting books about boys, for some great examples.

What other advice do you have for breaking the bias and raising our children in a gender equal world? Let us know in the comments!

This site uses Akismet to reduce spam. Learn how your comment data is processed.